A century has passed and yes, the human race stumbled into evolutionary compromise. But it’s not the androids who are the victors. Post-humans have exploded into preeminence, gaining tech superiority and a tech immunity against the global environmental degradation. Humans are trivialised, a minority species, their one last significant task, restore the environmental damage they inflicted on Earth and terraform off-planets. One human and his ‘biot’ android embark on such a journey to Mars, opening the possibility for an evolutionary path back to greatness, but hostile post-human agents have infiltrated their mission. 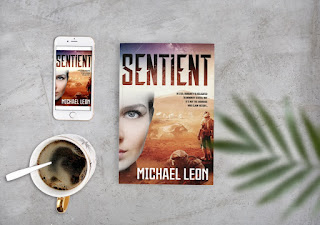 I was intrigued by space exploration from an early age and read many novels about inter-planetary travel. C A Lewis’s classic, Out of the Silent Planet was the first book I ever read, over fifty years ago, commencing my lifelong fascination about the future. HG Wells War of the Worlds was another favourite. It has been the motivation for a large number of film and television remakes. I still enjoy seeing new versions of this enduring classic. My favourite SFF novel about Mars goes hands down to Kim Stanley Robinson’s Mars Trilogy, a masterpiece of hard science fiction. In some ways, my new novel is a tribute to those famous writers as well as today’s intrepid explorers. At the time of writing, a lot of exciting space projects were unfolding, particularly around Mars. Early drafts of Sentient were about intergalactic flight, but I ultimately narrowed the scope of the story to our backyard, the solar system and Mars.
Review Tour
Full tour HERE
Stop One: Fabulous and Brunette (November 10)