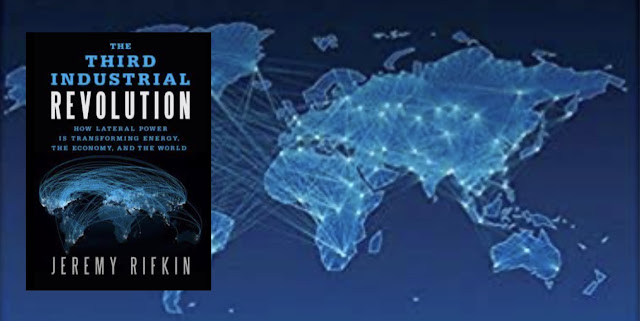 In the Third Industrial Revolution, Jeremy Rifkin describes the fast approaching third industrial revolution and what it means for the future. The first industrial revolution was the combination of print technology and cheap steam power leading to increased speed and availability of print material, priming the western public school system. The second industrial revolution was where communication and energy converged creating centralised electricity mediums such as television, phone and radio, thus dispersing the message ever wider. Additionally, fossil fuel energy and the development of the combustion engine led to suburban construction and the mass consumer society.

Rifkin postulates a third industrial revolution where the internet’s lateral communication system combines with a new kind of (natural) energy source requiring a collaborative approach. The benefits of collaboration is all around as relatively free data becomes available to all. Increasingly, big data in the shape of algorithms will increase productivity and reduce marginal costs toward zero, unleashing an unstoppable disruptive force. Examples abound, ranging from the free encyclopaedia - Wikipedia, to sharing renewable energy, the ultimate global disrupter. Rifkin predicts the next big bubble will be the 100 trillion dollar fossil fuel industry as businesses increasingly plug into solar and wind and park excess energy into the social grid. Like Spotify changed the music industry, ever larger numbers of small users will create a new kind of energy gathering process, akin to the cooperative systems of old but on a global scale.

No industry will escape the disruptive nature of the new digital economy. Logistics on the transport system will be overhauled as large fleets of trucks collect data on the highways, preparing for a driverless future. Will this lead to the well documented prediction that human capital will be replaced by technology and robotics? Not immediately, Rifkin postulates, arguing that there will be one generation (millennials) where wide scale activity will be required to retro-fit city buildings for renewable energy systems, transform the electricity grid to digital and upgrade the transport systems to electric vehicles. Every building will become a node to create an internet of logistics.

As the transformation gathers pace, will the population accept such dramatic change? Rifkin postulates that it will require a change of consciousness and given humans are a social animal, story telling remains the quickest way to turn thinking, just as long as they get the story right. Millennials will need to be convinced that the ‘ownership or market economy’ will not work in the third industrial revolution. Ownership will be replaced by access, market by network and consumption by sustainability. Sharing talents will replace independent autonomy, top down pyramid structures will be replaced by lateral networks. Classes that look like factories will be replaced by sharing talents and skills on internet modules.

Rifkin’s vision is positive, but he does note the dangers of the dark net and the challenges of data security and cyber terrorism. It certainly made me think about how future society will operate in the year 2120, the time setting of my next novel, Sentient. In this world, Earth’s management is willingly handed to AI to ensure the restructure and fit out of the third industrial world is carried out efficiently, in the face of the climate emergency facing the planet, a world of ten billion, half human and half ‘post-human. In this world, humans, biots and castes (humans with biot implants) grapple with emerging new visions such as interplanetary and intergalactic colonisation, as technology gathers pace, challenging the very future of humans as the next stage of evolution begins to emerge.

Posted by MICHAEL LEON at 11:44 AM No comments: