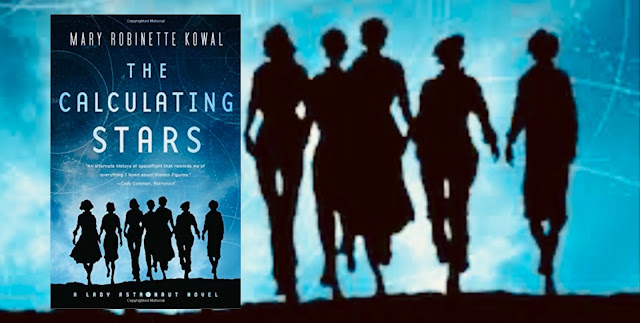 Mary R Kowal’s novel - The Calculating Stars - takes place in an alternate history where the USA’s scientists are not driven by the Soviet Union space race, rather by a global disaster that may end the human race. A destructive meteorite has destroyed many major cities in the USA, initiating a similar climate change pattern that led to the extinction of the dinosaur. The world’s scientists unite to fast-track space exploration so that the human race can survive the pending green house disaster.

The 1950s is not my favourite time period for story telling, yet despite my preconceived bias, I couldn’t stop reading this book. This in no small part, is due to Kowal’s word craft, but also her engaging main character, Elma York. It’s Elma’s enduring hope that strikes a chord and carries the reader through the hurdles and triumphs in her life, from barely surviving the meteorite strike to becoming an astronaut.

I also liked the way Kowal balanced the societal impact with the technological challenges, eliciting the human struggle that would be faced attempting to colonise other worlds. Racism, sexism and the stigma of mental health are rife in the 1950’s, yet despite these hurdles, Elma maintains a strong sense of hope and empathy for the many characters that come into her life.

The personal narrative accentuates Elma’s struggle - a woman in a male dominated industry determined to follow her dream. She never loses faith, even while facing harrowing personal and technical challenges. I particularly enjoyed the seamless way in which Kowal blended the technical craft of flying with Elma’s personal feelings as she took on those challenges. This brought a raw realism to many memorable scenes, creating a believability that made you me to read more.
Posted by MICHAEL LEON at 2:44 PM No comments:

Where Cixin Liu’s characters fall short, his world building shines, as does his take on theoretical physics, which dazzles like a noon day sky filled with three suns!

In the vein of A C Clark, Liu imagines the history changing event of first contact with extraterrestrials, while setting it against the tumultuous latter 20th century political history of China.

The story opens in the cultural revolution of the late 1960’s where Ye Wenjie’s father, a well known physicist is beaten to death by Red Guard fanatics, leaving a permanent scar on her faith in the world. She is ultimately conscripted to a secret Red Coast base, a telecommunications centre where she discovers proof of extraterrestrials.

Fast forward to the not too distant future where prominent scientists are being murdered. Shi Quian, a quirky and wily police officer is investigating these events. A scientist, Wang Maio, a nano materials researcher is drawn into Shi’s world, soon witnessing inexplicable and disturbing events, including playing a strange VR game, ‘Three Body’, which simulates an unstable and declining world in another star system. This ultimately ties into an actual world, Trisolaris and their inhabitant’s own desperate plans for survival.

Character development is the weakest link in this otherwise dazzling world envisaged by Cixin Liu. Even more extraordinary is Lui’s bold take on theoretical physics, seemingly challenging the boundaries of scientific investigation with his inspiring imagination, a prerequisite for great ‘hard’ science fiction. He achieves this in spades, making his work shine with the intensity of three suns!
Posted by MICHAEL LEON at 11:21 AM No comments: