Review
Bulb by Bradley Wind builds a unique and imaginative tale where immersive technology of the future infiltrates all areas where light penetrates, allowing entire lives to be visible to all and recorded in every detail in the ‘Grand Archive’, a technological miracle designed by the antagonist, Dr Mamon. Ben, the protagonist, takes the reader on his journey, from the life-changing events of the ‘accident’, to the myriad of experiences he has, real and surreal, as he tries to come to terms with loss.

Mr Wind ambitiously delivers a multi-faceted view of a future, impacted by exponential technology advances, and its impact on what are considered cultural norms. How does one act in a world where there is no privacy? This is no mean feat, but his writing style allows him to tackle the challenging subject matter in a unique and imaginative way.

Descriptive prose and quirky characters such as the twins, Ed and Francis and Ben’s friends, Laurel and Lenny, allow us a foothold into the writer’s psychedelic world, as seemingly normal events are turned into mind bending experiences. Convincing world building enhances that experience with the use of futuristic technology such as computer hover screens, ‘whigs’ containing life memories and the ‘Tornado’ games room enhancing believability, as does infrastructure settings such as shopping mall homes and cities built in the sky.

I admire Mr Wind’s boldness, but at times, I felt pacing was an issue. For example, the introduction stretched almost halfway into the novel. Overly long dialogue bordering on information download also unnecessarily slowed the story down.

That said, I highly recommend BULB to sci-fi buffs, particularly for fans of cyberpunk writers like William Gibson (Neuromancer). 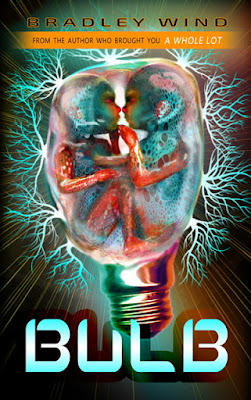 If light records everything we do, can even shadows hide our secrets?

Imagine your entire life is available for review.

Imagine each day any event can be watched over and over again - your birth, your first kiss, your recent shower, that private itch - all replayable from any angle. Now imagine these can be viewed by anyone at any time.

In a world where there is far less ego, little crime, and even the smallest moments are recorded and available publicly through the ‘Grand Archive’ a Utopia or Dystopia? Traumatised by memories he does not want to recall, artist Ben Tinthawin is recruited by the enigmatic, Grand Archive creator, Dr. Mamon, who seeks help for his nextgen designs to enhance the world. Ben stumbles across a secret revealing the doctor’s true scheme in all its surreal splendour and questions whether the doctor really is the benevolent soul he claims to be. As the paths of the paths of the broken man and a brilliant revolutionary cross, the world shifts and cracks start to appear. Even our most fundamental codes can be encrypted- or corrupted. If the wrong information is discovered, more than Ben’s life will be in danger of total shutdown.

Prepare yourself for full exposure.

Excerpt
“There must have been some of that freakweather going on here. There’s a whole damn forest on the highway. Take the next exit, or I will.”

“Bah, it’s only threatening to rain. Why does everything have to be freakweather? A few branches won’t kill us,” Dad said.

This was more than a few branches. Something ahead looked like piles of dir as if there had been a small rockslide off to the side. The streetlamp shone directly above it, and when we got closer, you could see it was two little dead deer. They faced each other heads to tails like some kind of strange yin-yang symbol.

“Oh, look at those poor baby deer,” Mom said with her fingers pressed to the window. Their eyes, glazed and open, appeared almost alive.

“Look up there,” Dad said, pointing off to our left.

A considerable deer herd speckled the hillside, small points of glowing yellow eyes reflected the headlights. In the past, our family made deer spotting a competition. Dad liked to say this region was “infested” with them. I watched his face in the rearview mirror, a smile on his lips from his big score with the deer game, but it melted away as the rain started hitting the windshield. The fading grin was the second last thing I saw before it happened. The fear in the profile of Mom’s face was the last.

Mom shouted something unrecognisable as our headlights brought the deer standing in the road to bright view. The first deer looked like an albino, all white from the side - head turned to us, eyes blank and SLAM! 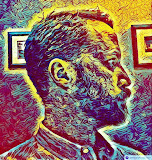 Bradley Wind was born and raised in Pennsylvania. He is a prolific visual artist whose work has exhibited in the 20th century wing of the Philadelphia Museum of Art.

He worked as a toy designer for K’nex Industries, a manager of IT for Pearl S. Buck International and is currently a director of IT for a child focused non-profit. He raises chickens and two lovely girls with his wife in Chester County, Pennsylvania.BULB is his latest novel

Posted by MICHAEL LEON at 11:01 AM No comments: