Blurb
In 2120, the human species has been relegated to minority status. A century of rampant unchecked climate and technological change and subsequent catastrophic global pandemics, has laid claim to the very young, accelerating post-human development. With the help of biots, ironically the human race’s finest creation, post-humans’ fulfil their aspiration, colonisation of the galactic, led by the largest post-human corporation on Earth, Apollo Corporation.

Gaea, a preeminent human organisation is tasked with returning Earth’s climate to preindustrial conditions and developing new off-planet habitable zones. One such zone is run by Dr. Zi Walker, who’s extracting a rare, highly prized natural resource (Elithium), that fuels nuclear fusion reactors to drive the terraforming process. But, there’s one last piece of the puzzle to make terraforming of the whole planet a reality. The development of a multiverse quantum computer (Trojan), a Gaea funded project, overseen by her brother, Dane.

Dane is compelled to leave those he loves, to help Zi terraform Mars. He and his biot assistant, Hali, accompany the smuggled Trojan computer on a shipment of terraforming equipment bound for Mars, but enroute, the project is infiltrated by Apollo secret operatives assigned to stop them and take the Trojan computer. An epic battle ensues, that will prove to become a flash point in human, post-human relations and the evolutionary fate of mankind. 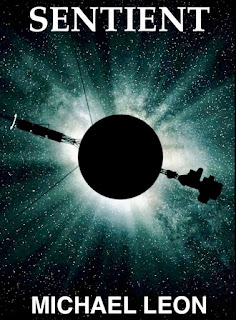 The reconnaissance soldier, Harvey, was the first to walk into the cave, his adversary not just Draven, but to his shock, four Dravens. The soldier attempted to fire his pulse gun, but it failed to activate, causing him to back away to com Jarvis, when it too failed.
Draven was unarmed except for a single dagger, which he removed from his sheath and pointed his assailant’s way, inviting him to battle. Harvey, like all military biots, was a robotised killer, programmed to fight in the fires of hades if there commander required it. He welcomed Draven’s challenge, exchanging a steel salute with his blade.
In that moment between standoff and battle, both combatants exchanged an inscrutable glance that signalled the opening gesture, acceptance that what they now started would only end with one standing. War-like adrenaline saturated the cave like the Martian dust as they began a dance they’d spent their lives honing. Both were masters of the blade.
The soldier relished rather than feared Draven’s advantage as he rotated 360 degrees to confront the four assailants that encircled him. It was a Russian roulette encounter, with only one holding the real weapon of death. But which? The soldier flicked his handle, extending his knife to a sword, showing he too brought tricks to the arena. Masterfully, he swept the sword in a Samurai-like movement of grace and skill glancing all four assailants, clicking real metal on only one, establishing his real target.
He attacked Draven, slicing, carving and driving his sword in every possible direction and angle but each time Draven evaded his assault untouched, toying with him. The soldier grew bolder with every exchange as if the challenge was all that mattered. Ever faster, he launched attacks that ultimately pushed Draven into the rock wall. Cornering Draven, he felt emboldened to make a devastating but risky assault, successfully finding the small opening in his defence allowing Harvey to plunge his sword deep into Draven’s core.
The sound of steel driving through Draven’s body echoed through the cathedral signalling victory, but to the soldier’s shock, Draven stood tall, before the flickering of his holograph gave way to the cold rock where he stood.
“You’re fast, soldier. But I’m as quick as light,” he said, pulling his knife from the soldiers back, spilling his blood to the Martian dust, decommissioning the young soldier with a single decisive incision.

Michael Leon has published three novels: Cubeball; Emissary and Phantoms and is launching his fourth, Sentient. His work ranges from speculative fiction  to fantasy romance. Prior to that, Michael worked as a business analyst and published international agribusiness books.

Posted by MICHAEL LEON at 3:08 PM No comments: 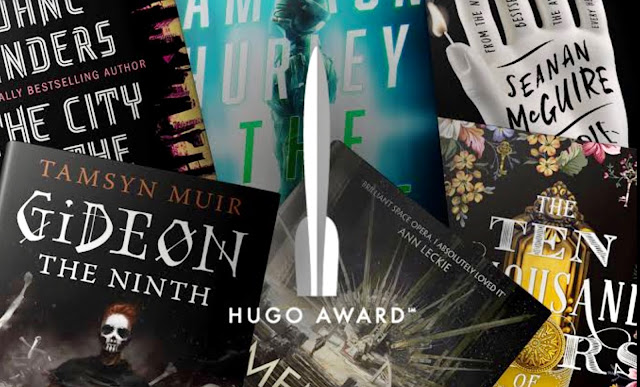 The 2020 Hugo Awards are fast approaching. A favourite annual literary award for the best SFF works and considered the premier award in science fiction. It has been operating since 1955. A good database to see all the winners of the Hugo’s, as well as all other major SFF awards, is at science fiction awards database

CoNZealand will hold the event in 2020, which due to the Coronavirus pandemic will only be viewed online from July 29 to August 2.

I’ve been reading some of the recent previous winners of the award in preparation for the upcoming event. The author, N K Jemisin has dominated the awards with her trilogy: The Fifth Season; The Obelisk Gate and The Stone Sky, winning the last three Hugo’s in a row. Prior to that, Mary R Kowal’s novel, The Calculating Stars and Cixin Liu’s The Three Body Problem took the award.

There’s an interesting bunch this year, so I hope to read all of the 2020 nominations before the award night. The nominations for the major award are:
The City in the Middle of the Night by Charlie Jane Sanders;
The Ten Thousand Doors of January by Alix E Harrow;
Middle Game by Seanan McGuire;
The Light Brigade by Kameron Hurley; and
Gideon the Ninth by Tasman Muir.
Posted by MICHAEL LEON at 5:02 PM No comments:

The key protagonist, Essun, remains the hero in The Obelisk Gate, as she settles into the underground community of Castrima. The surprise element of the previous book where all three POV characters are Essun at different stages of her life, is replaced with two main protagonists, Essun and her daughter Nassun, as they struggle to survive in a deteriorating world.

Nassun flees her hometown of Tirimo with her dangerously unpredictable father to the community of Found Moon where she is ultimately guided by the Guardian, Schaffa, who once guided her mother. Essun, with the help of Alabaster, further develops her orogene skills to prepare for the increasingly violent battle, raged by Father Earth against reckless human activity that led to the loss of its Moon.

Somewhere along the way, I lost interest in both protagonist’s, not really caring for either of them. I’ll put it down to the excessive descriptions used, no doubt setting up for the final instalment, but it read like two separate stories. I’d have given up on this book all together if not for Jemisin’s undoubted writing skills and the fact I so enjoyed book one. I suspect the third instalment will be as enjoyable as book one, as Essun’s and Nassun’s lives finally come together for the story’s resolution. Despite the trilogy’s slow middle, it remains a truly unique fantasy world told by a talented writer.
Posted by MICHAEL LEON at 3:15 PM 1 comment:

The Fifth Season is an epic story of survival in an unstable planet, oppressed by nature - Father Earth, and human against human. Earth is the main antagonist where seasons are separated between simmering volcanic, seismic, atmospheric and geomagnetic disturbances and utter devastation. Human mutants, orogenes, are used to subdue the violent earth, delaying the inevitable tide of cataclysmic extinction. The controlled environment known as the stillness allows a temporary beleaguered civility for its citizens,  but still the orogene’s power is feared and hated by the humans they protect and exploited by an elite ruling group known as the guardians.

The Fifth Season spans three seemingly disparate times on Earth. All three protagonists are orogene women: the child, Damaya, being trained to properly develop her orogene powers; Syenite, a 4 ring orogene, who is sent on a mission with the experienced 10 ring orogene, Alabaster; and Essun, the older mother who leaves home to find her husband who murdered her son and took her daughter. There’s a secret in this multiple point-of-view story that surprises and enhances this epic story. Told in the second-person narrative, Jemisin effectively submerges the reader into her imagined future Earth that sits atop our own civilisation, long ago buried. Life barely survives a genocidal Father Nature where memories of honouring the once revered Mother Nature are long forgotten.

This bleak, savage world is akin to Cormac McCarthy’s The Road, where humanity is assaulting its own, even though life on Earth borders on extinction. However, unlike The Road, Jemisin offers a glimmer of hope for civilisation that nature can be changed.
Posted by MICHAEL LEON at 11:48 AM No comments:

Blurb In 2120, the human species has been relegated to minority status. A century of rampant unchecked climate and technologi...