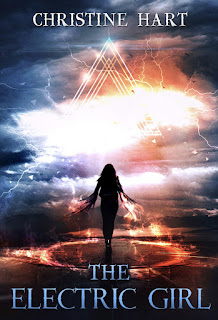 Polly Michaels is trying to forget that her mom has cancer. She keeps busy at school and plods through a normal social life. Until a freak storm and a unicorn appear in the orchard next to her house.

Sy’kai wakes on an orchard floor to the smell of rotting cherries and wet earth. She doesn’t know where she is - or who she is - but she knows something is hunting her.

Polly recruits her friends to find the mysterious creature she saw from her window while Sy’kai, a confused shape-shifting endling from another dimension tries to piece her mind back together. Once the human girls find Sy’kai (whom they nickname Psyche) the mystery unravels and the danger facing all of them comes into focus.

A gritty struggle ranges throughout the girls’ rural hometown and in the wild terrain around it. All while two questions hang over their heads. Can an alien deliver a miracle for a human mother? Can a group of teens defeat an inter dimensional demon?

I thoroughly enjoyed the cracking introduction. Christine Hart showcases her considerable writing skills, quickly moving the story forward and effortlessly building intrigue. However, the middle section doesn't quite reach the heights of the promising opening. That said, The Electric Girl should be an entertaining read for young readers.

Polly is your typical fifteen-year-old, filled with dreams of unicorns and boys, but she has to deal with her mother, who is seriously ill with cancer. Fortunately, Polly has a group of loyal friends to help her cope.

Her everyday life among the cherry orchards suddenly changes when two aliens, morphlings, crash through a time portal onto Earth. One, Sy'kai, morphs into a young girl. The other, Nur-gahl, her deadly pursuer, transforms into a wild bear.

Polly and her friends soon get caught up in the alien encounter. For me, extended scenes of Polly and her friends in their rural hometown slowed the story's pace, although, for younger readers, it may reinforce the strong bond these loyal friends share as they face life-threatening events.

The author gave tantalising glimpses of Sy'kai's world in a meditation scene with Polly. But, as a science fiction fan, I wanted to know more about the two aliens and less about Cherry Orchard and its young inhabitants.

Overall, young readers should enjoy Christine Hart's magical realm of unicorns, aliens, and the band of courageous friends who help an inter-dimensional being. A 3.5 STARS read for the young adult audience.

Sparks cut the space in front of her, dancing in a lacy ice and sapphire ring. If I can close the portal with him inside, it won’t matter what we leave behind or where I land. Trapping Nur-gahl was nearly impossible because Sy’kai needed her wits about her to close a portal. If she closed it too quickly, Nur-gahl would be left behind, free to devour an entire world, unchallenged by beings not capable of understanding what he was let alone the depths of his hunger, his fury. With every new passage her brain grew increasingly muddled by the energy expenditure and the instant intake of information—the new world and all its life being taken in at once. Her only chance to weaken and then destroy Nur-gahl was to find a world at the moment of its death, with nothing left for him to mimic. Sy’kai focused every molecule of her consciousness on finding this elusive destination. Her electricity stretched into a clumsy oval as a window to the unknown tore open. Energy exploded outward. Fresh, sweet air rushed at her, filling her lungs with relief.

But this new world was far from barren.

“I smell a feast on the other side! Go ahead, jump in. I am right behind you, ssssister!”

Rage flared in Sy’kai’s core. She risked a glance back and saw the dark silhouette of a gargantuan, monstrous creature racing toward her. She faced the portal again and plunged through.

Heat and light devoured Sy’kai’s flesh as the fissure enveloped her. What will I be on the other side? Please, please, let this be the final shift, she thought as the vacuum of the portal crushed her entire being.

And then she was spat out from the portal, into the dark of night. Atoms pulled other atoms into minute clusters as millions of electric implosions sucked matter off the ground and out of the surrounding terrain. Pure instinct flowing from a primal mind scanned the landscape for a blueprint of sentient life. A mental tentacle scraped and slurped, hungry for material until it finally latched onto something in the distance and made its decision. Another explosion crackled behind her elemental brain, but the sound hardly registered in the morphling’s still-forming body.

Gray matter coalesced, bone materialized, and muscles knit themselves around the skeleton as it built itself from nothing. White light and raw energy found purchase through four glowing hooves. Delicious soft gas kissed her forehead, a body part that felt somehow heavy. Light hovered overhead, illuminating the way forward through dark leaves and moist dirt.

Brightness flooded the field ahead of her. Moments later, as her eyes adjusted, she sensed another life form somewhere inside the light. Instinctively, she walked toward a face she couldn’t see. A slight figure, a willowy bipedal creature with orange-red hair slowly came into focus. And the morphling brain, still crude with instinct and ability, reached out telepathically to evaluate this opposing alien heartbeat.

She turned back to the trees then as she felt the heat of another uncontrollable transformation taking hold. 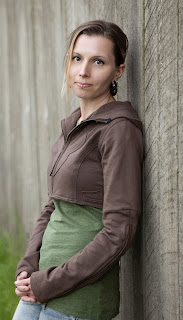 Christine Hart writes from her suburban home on BC’s beautiful West Coast. She specializes in speculative fiction for young readers. Her stories feature detailed real-world landscapes as a backdrop for the surreal and spectacular.

Christine’s backlist includes YA, NA, and MG titles, including the speculative trilogy The Variant Conspiracy. Her debut YA, Watching July, won a gold medal from the Moonbeam Children's awards in the mature issues category and an honourable mention from the Sunburst Awards.

Christine holds a BA in English and Professional Writing, as well as current membership with the Federation of BC Writers and SF Canada.

She works as a content and communications specialist for a technology studio in Vancouver. And when not writing, she creates wearable art from recycled metals under the guise of her Etsy alter-ego Sleepless Storyteller.  She shares her eclectic lifestyle with her husband and two children.

Check out all the other tour stops HERE

The City We Became

There is a threat to New York of ‘Lovecraftian’ proportions, waged on New York by parallel universe apparitions. I thought I’d try the 2020 BSFA winner, a disappointment to me as there was more fantasy and less science fiction, apart from patchy references to multi-verse theory. Jesmin moves away from the ‘other world’ settings of her previous award-winning novels to an Earthbound location. New York is where five avatars representing the major Burroughs of New York defend their city against an ‘other-universe’ threat that feeds on cities that are about to transform to a higher level of consciousness.

The five characters are pitched in the same direction to find a primary avatar unconscious somewhere in the city. Finding and joining him is their only hope of defeating an adversary that destroys whole worlds. Jesmin’s new novel, as always, is filled with witty prose, but it wasn’t enough to engage me. In the end, I skimmed through the story, so it would be unfair to rate it. Readers looking for insightful fantasy with a strong social commentary bent will rate this highly. Science fiction fans may do better to read Jesmin’s earlier work.

Posted by MICHAEL LEON at 1:27 PM No comments: